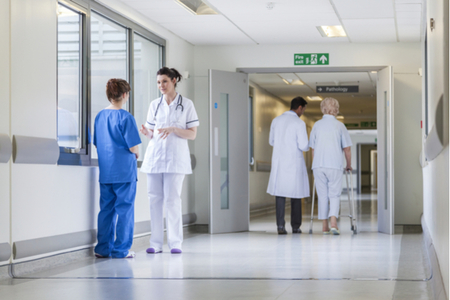 Many of the roles within an NHS Trust, and specifically in hospitals, can be physically demanding, with nursing and healthcare workers particularly prone to suffering from musculoskeletal disorders (MSD) as a result of, or exacerbated by, moving and handling tasks.

The Trust employed a part-time in-house physiotherapist who was available for staff referrals. But, following the Trust’s achievement
of Safe Effective Quality Occupational Health Services (SEQOHS), the profile of the Health Work and Well-Being Service was enhanced and that resulted in more people using staff support services and therefore waiting up to four weeks for an initial appointment with the physiotherapist.

This resulted in many staff being absent from work for extended periods or being offered reasonable adjustments or light duties, causing a negative impact on the Trust’s levels of absence and productivity. This in turn led to increased expenditure on temporary staffing to ensure continued provision of high standards of patient care.

The Trust therefore needed to find a way to support its employees in accessing quality physiotherapy treatment much more quickly in order to:

• Reduce employee discomfort and pain levels, due to MSD
• Minimise associated absence and facilitate an early return to work
• Improve productivity
• Reduce the risk of further absence due to recurrence of MSD

The Trust began working with Physio Med, via the HR department and its on-site physiotherapy service, to implement a robust occupational health physiotherapy service to employees. Intervention was provided via a blended approach of fast track telephone triage, remote multimedia self-management and on-site  face-to-face treatment.

Trust employees accessed the service by referral from the HR department. They were then contacted within four hours by Physio Med’s award winning Physiotherapy Advice Line (PAL) service, which involves telephone triage to ensure they were clinically appropriate for treatment through PAL.All appropriate referrals received an initial assessment call from a Senior Chartered Physiotherapist within a maximum of three days,which incorporated a series of evidence-based clinical questions and a series of movements to facilitate diagnosis. The employee was then advised on the best way to self-manage the condition, thereby assisting the physical healing process.

In order for staff to be able to look after their patients and carry out their duties to a very high standard, they need to be in excellent physical health themselves. Therefore reducing the levels of sickness absence due to MSDs was a key driver for the Trust.

In an 11 month period, a total of 226 cases were progressed by Physio Med, with 84% being treated via the PAL service and 16% being Fast Track routed for face-to-face treatment after initial assessment. At the point of referral 57% of the employees referred were absent from work due to injury, while the remainder were at work with pain and therefore operating at reduced productivity levels and highlighting the hidden cost of presenteeism.

The initial assessment appointment took place within an average of 1.9 days – compared to four weeks under the previous system. A total of 66% of patients were discharged after just ten days, as their condition had either resolved or they were able to effectively self manage their condition.

In financial terms the reduction in sickness absence and improved productivity of those who had been injured, has been significant, saving hundreds of working days that would otherwise have been lost and delivering an estimated saving of almost £329,000 (based on an average employee cost of £91.56 per day) - which equates to an ROI figure of almost 17:1 This played an important role in the Trust maintaining its service levels to the general public, meeting NHS targets and of course saving the Trust money.

Physio Med reported back to the Trust on a host of other criteria – including anatomical site of the injury, referring locations, job roles and further breakdown of the impact of the service on pain levels and productivity – identifying trends to help the Trust put practices and measures in place to reduce future injuries and issues.